skip to main | skip to sidebar

How to die easily on Samui! 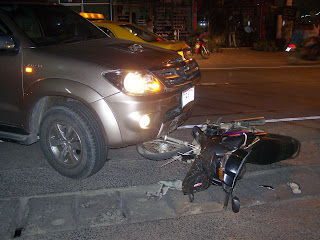 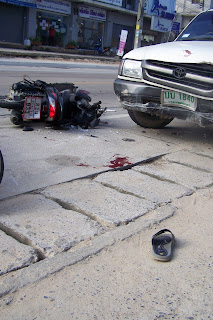 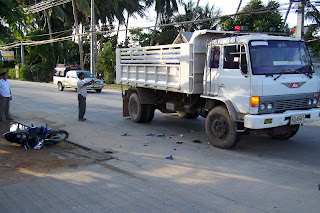 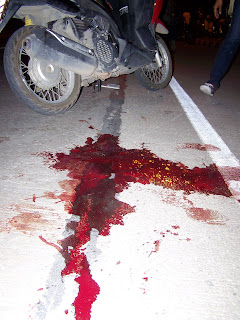 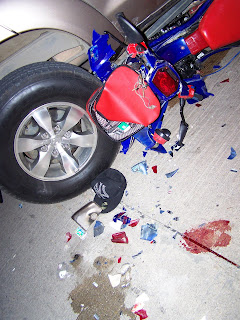 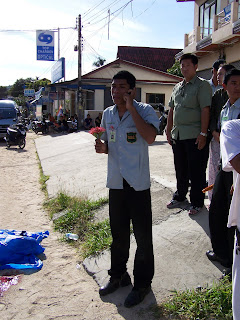 Ok... as a 'biker' (ie: someone who loves motorbikes) of nearly 40 years, I freely admit that when the government in England made wearing helmets compulsory in England, I was up there with the rest of them screaming 'Education NOT legislation'... but... over the years (maybe it IS a case of 'getting older') my attitude has changed... and, since coming to Thailand, and particularly since starting to work with Samui Rescue, I now firmly believe that anyone who doesn't wear a helmet when riding a motorbike is foolish and is taking a huge risk with their lives!

Yeah... I KNOW that this kind of statement - in a kind of way - supports the 'nanny state/interference/personal choice' thing, but I really don't give a monkey's doo-daah about that. I am NOT a fan of the nanny-state principles, and I do believe that too many governments infringe on people's freedom of choice, but I also believe that - sometimes - laws are absolutely required to compel certain behaviour patterns etc... and the wearing of helmets is, I believe, one of those times!

Let me try to explain why...

... about a month ago, at 2 am in the morning, we (my son and I) were called out to an accident on the main road, only a kilometre or so from where we live, in front of a well known resort.

We arrived there within 2 minutes of the call - about 4 minutes after the accident. There was a 'felang' (non-thai)lying face-down on the road, and, nearby, 2 motorbikes that had obviously been involved in a collision. As we grabbed the medical bag and oxygen from the car and ran over to the scene I was looking for the 'second' injured person... the rider of the other bike. There were a couple of people sitting on the edge of the pavement... one of them a ketoy (Lady-boy), and looking closer I saw that he/she was crying and had some superficial grazes.

My son went over to check-out the ketoy, and I went over to the unconscious felang. He had some superficial grazes on his arms and face, and nothing obviously broken... but he had a serious head-injury, with blood coming out of both ears, nose, and mouth. He was breathing - just - but totally unresponsive, and with massively dilated pupils... didn't look good for him at all.

I got an airway into him, the oxygen mask on, and was just in the process of covering-up the head wound when the Samui Rescue ambulance arrived. The unfortunate chap was put on a board and taken to hospital by the ambulance (driven by 'Rescue 29').

I heard he later died... essentially due to the massive head trauma he received when his head hit the ground.

The ketoy was treated 'on-site', didn't feel she needed hospital treatment, picked up her motorbike, and went home.

It appears that there was a relatively low-speed collision between the 2 bikes... one ridden by the ketoy, the other by the felang (an Englishman as it turns out). The ketoy was wearing a helmet... the English guy wasn't. The ketoy went home with superficial grazes, the Englishman went to hospital and later died. (My sincerest condolences to his family and friends... I never get immune to the tragedy that surrounds an incident like this).

A couple of months ago I went to the scene of a fatal accident in Choeng mon... essentially in my capacity as 'recorder/photographer' for Samui Rescue. There was nothing to do in a medical sense.

When I got there, the police were just finishing up their official duties... recording the scene, interviewing witnesses etc. The body of a Thai man in his 50's was still where it fell after the motorbike he was riding was struck a glancing blow by another bike. The dead man's son was standing by his father's body holding incense and a small posy of flowers... tears rolling down his cheeks. He wore the same security-guard shirt as his father. (See the last photo above).

The other motorbike was doing approx 20 kph when it hit the older man's bike (which was only just moving... maybe 5 kph?)

The young boy had a nasty case of 'road-rash' on his arms and back... treated 'on-scene', but went to hospital for a check-up. He was wearing a (very cheap, plastic) helmet.

The older man died instantly when his head hit the ground with enough force to break-open his skull... he wasn't wearing a helmet.

I have been to similar scenes at least 20 times over the last year or so... and I am just talking about accidents/incidents where people have died purely as a result of NOT wearing a helmet! I have been to numerous others where a helmet would have made little or no difference to the outcome.

When you get this close to the tragedy... so close you almost feel it personally - and realise that many people would still be alive if only they had worn a helmet.

And then there are the sad cases of those people left alive, but brain-damaged in various ways... so sad, so tragic, and so unnecessary. At the risk of sounding 'twee', I wonder (if they could have their time again) if they would opt to wear a helmet? I am sure they would.

Well, when your personal 'choice' involves and/or affects other people (family, friends, rescue/medical workers, police, the unfortunate people who witness your accident/death, other people's tax monies that pay for all the officials involved, etc) then I think that it is time to legislate.

Here on Samui there actually IS a law that says the 'driver' of a motorbike must wear a helmet. It says nothing about passengers, or how many people you can have on a bike (I have personally seen 3 adults and 3 kids... ALL on one bike!)... and the helmet law is only sporadically enforced anyway... so... it boils down to individuals making their own decision... and many choose NOT to wear one... and, sadly, many die because of that choice.

Samui is a crazy place to ride/drive at the best of times... and sometimes it could appear to an outsider that there actually aren't ANY traffic rules! It is, simply, incredibly dangerous here, so is it worth dying just for a matter of principle... I suppose it depends on just how important that principle is. Yes... there are some principles that could well be worth sacrificing your life for... but for wearing a f**king crash helmet?

Sorry for the rant here... it's the family and friends that are left behind that I feel for.
Hey ho... such is life/death on Koh Samui.

The photos above are shots of some of the 'head injury' accidents that I have had to record.
Posted by 047 at 3:34 PM No comments:

Welcome to my blog about Samui Rescue 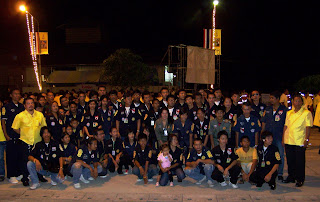 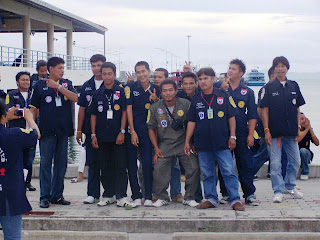 Welcome to this blog site... which is dedicated to all the amazing people who work for Samui Rescue.
This blog is my blog, and does not necessarily represent the views of any other person in Samui Rescue.
Samui Rescue provides FREE emergency paramedic, rescue, and ambulance services to the people of Koh Samui – both Thai and foreigners – whatever their situation, and has been providing these emergency services on Koh Samui for over 19 years.
The Samui Rescue Foundation has close to 300 volunteers, with almost 50% of these volunteers qualified as E.M.S. Practitioners and ‘First Responders’. They are based in strategic locations around the island in order to provide full island cover, 24 hours a day – 7 days a week… and this is ALL FREE… and for everyone!

The Samui Rescue volunteers are trained by both the Samui Hospital in Nathon and Bangkok Hospital, Samui, and Samui Rescue staff are the first on the scene of any accident/incident in over 95% of their responses on the island... with an average response time of only 4 minutes!

Samui Rescue work hand-in-hand with the island’s other emergency services (police, fire and hospitals) and constantly monitor these services with professional Amateur Radio equipment – bought by the volunteers themselves (over 85% of the Samui Rescue staff have portable walkie-talkies/radios, and are qualified radio operators).

Samui Rescue Teams are sited in ‘stand-by’ sites at Nathon (Samui Rescue’s headquarters), Saket, Lipanoi, Lamai, ByLaem, BoPhut, Napalarn, and Maenam. These sites are manned (and ‘womanned’!) 24 hours a day, 7 days a week, by volunteers totally committed to helping others. They have to be totally committed, as the organization (although it does get some donations) is essentially self-funded. This means that all volunteers have bought all of their equipment themselves… from their medical bags (and the bandages, equipment etc inside them), to their uniforms and mobile radios! Many Rescue staff use their own vehicles to rush to emergencies, and have therefore bought even the ‘blues and twos’ and sirens on their cars (and, of course, also pay for the petrol/diesel that goes in those cars!).

Samui Rescue staff are also trained by the island’s Fire Brigade to assist and support them during fires/emergencies, as well as (alongside the Police, hospital staff, and Fire Brigade personnel) being trained as members of the island’s ‘Major Disaster Team’.

Samui Rescue staff show the best side of Thai people, selflessly giving their time and expertise to help people in the most traumatic and worst possible imaginable scenarios… from recovering bodies of drowned/natural death/murder victims… extricating critically injured people from car wrecks… attending to (and transporting to hospital) accident and/or emergency victims (everything from R.T.A.’s to heart attacks)… as well as…..
* Organizing and collecting food for Samui’s poorer families…
* Educating and entertaining youngsters during Samui’s ‘Kids Day’…
* Removing snakes (and other dangerous animals) from peoples homes…
… and almost anything else that you can think of which comes under the umbrella term labeled ‘helping others’!

Somehow, they manage to balance this with their ordinary lives as family men/women, taxi-drivers, shop owners, catering staff etc. Samui Rescue volunteers come from all walks of life, and I am proud to work alongside them.
This blog is dedicated to all of the Samui Rescue volunteers, and will give an insight into their work via regular blogs that may be illustrated with pictures. Although I have no intention of showing graphic images (so all you blood lusting voyeurs can look elsewhere!) some may find some of the pictures upsetting.
THIS IS NOT A SITE FOR VOYEURS... IT IS A SITE TO SHOW THE DAY-TO-DAY LIFE OF A SAMUI RESCUE VOLUNTEER! (ie: ME!).
Posted by 047 at 6:31 PM No comments: